The “Interior decorator of the year” award that was established by Péter Laki in 1998 was delivered on 14th December, Monday, already for the seventeenth time, the festive frame for which was provided by the Pesti Vigadó. 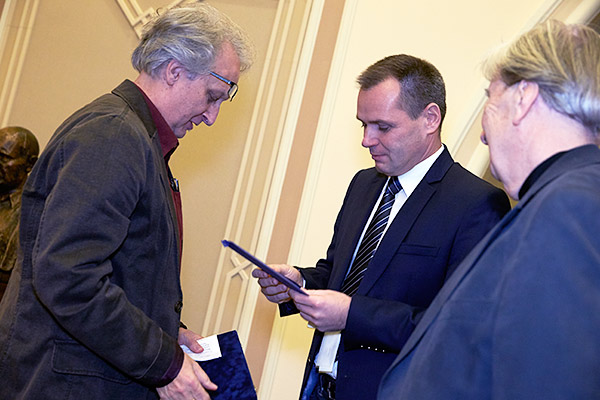 The title of the “Interior decorator of the year 2014” was earned by Pál Somogyi with the reconstruction of the Szent Gellért Hotel and Educational House of Székesfehérvár. The professional jury stated with pleasure that Pál Somogyi drafted his interiors in the customary manner presented and known so far “with especially clean forms beyond high professional level too, deservedly, with amazing elegance.

The jury particularly highlights and commends the establishment of the International Hungarian Pavilion of Velence, the work of Csaba Jakab and László Attila Márton. This interior speaks with the cleanness of simple sentences and, as far as we know, it inspired the audience of the biennale very much.” 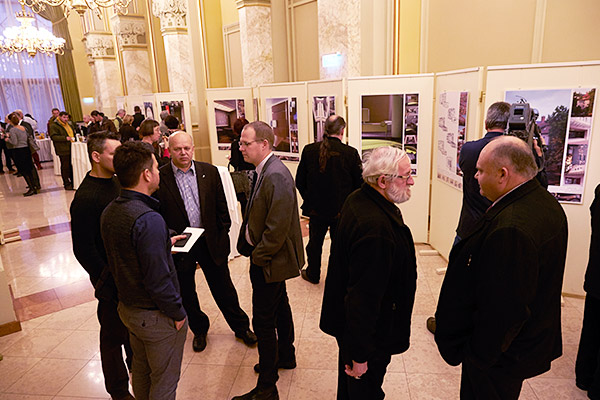 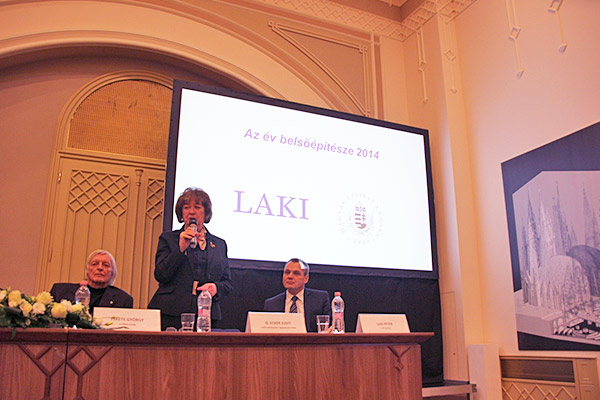 In addition to the ormolu memorial plaquette, attesting the honour, the awarded person received also an award of one million Forints from Dr. József Finta, chairman of the jury and from the founder, Péter Laki, president-director general of the Laki Épületszobrász Zrt.

The investment is a construction supported by the European Union that was won on a public procurement tender, whose principal is the Forster Gyula National Centre of Inheritance Protection and Property Management.

In the course of the investment a reception building giving place for the exhibition of the visitor centre and suitable for organizing events as well as the arrival building, including the service sanitary blocks and changing rooms, were constructed. The construction affected also the protected territory of ancient monuments of the ruin area of Kupavárhegy. 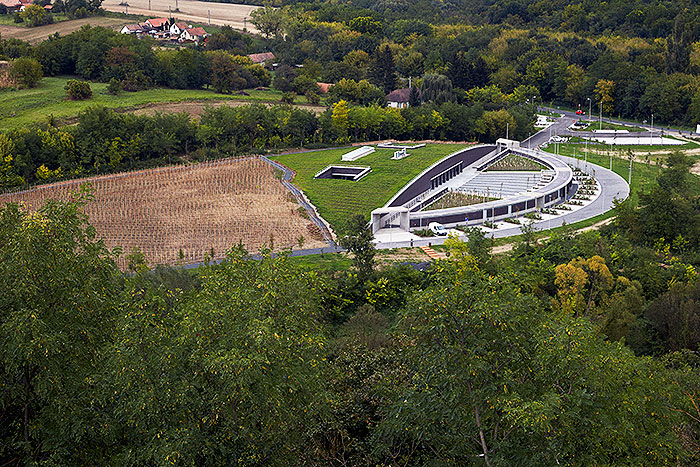 In order to ensure access and parking, new road connection, roads and car parks covered with asphalt and paving-block were built. They were made outside the reception building’s entrance façade and roofed courts, sunk under the ground and more than 1050 stools of lavender were planted here. The two buildings are connected by an open-air programme area covered with stone plaster suitable for the organization of open-air events and a green area decorated with coloured ornamental pales and ornamental grass.

On the nature conservation area that separates the buildings of the visitor centre and the ruin area, we ensured the connection of the two territories by a drive of oak-tree structure, lifted from the ground level.

In the course of the works of landscape architecture timber bulkheads were made that follow the level differences of the territory and visitors can encompass the facility, the orchard and the vineyard on an esplanade bordered by them. Environment arrangement on the territory included the implantation of nearly 4550 vines, hundreds of trees, thousands of bushes, perennials and invasion of the territory by grass. 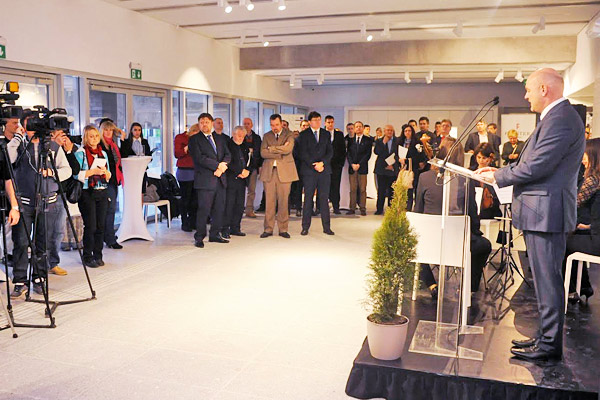 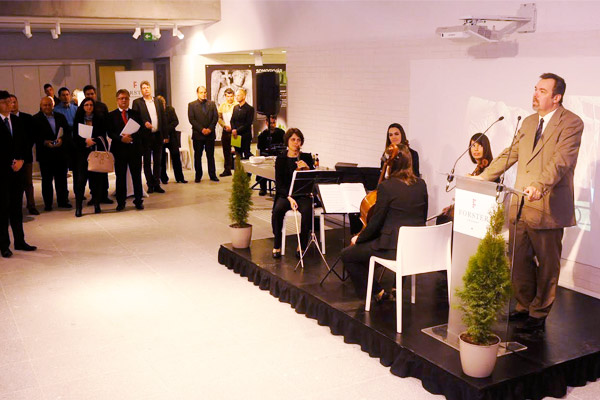 On the inauguration László L. Simon, the Under-secretary of the Premiership, inter alia, said that the new visitor centre increases the touristic attractiveness of the region of the Southern Balaton, at the same time he explained that the investment has to be an “overture” of the further developments, by which the former pomp of the Benedictine abbatial monastery and abbey also could be presented.

To the greatest pleasure of the children on 7th December Santa Claus arrived to the youngsters of the LAKI Zrt. too that, after the musical performance of the bogeymen, welcomed Santa Claus, arriving with huge bag, with great pleasure. Every child listened to the pieces of advice and the histories of the white-bearded man about his journey and his many tasks. They scanned his movements with delight, while everyone received some gift. 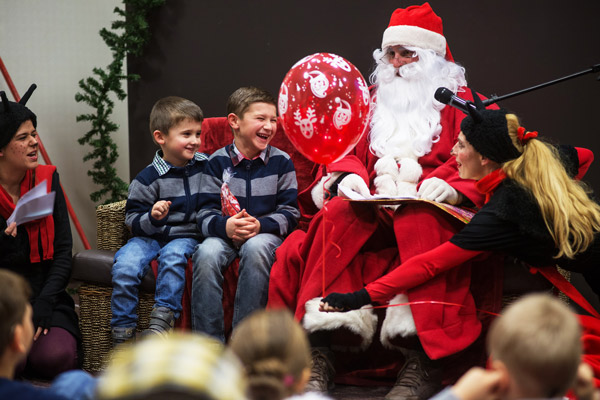 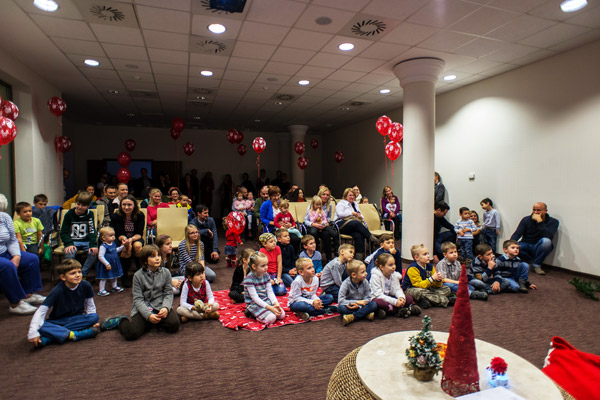 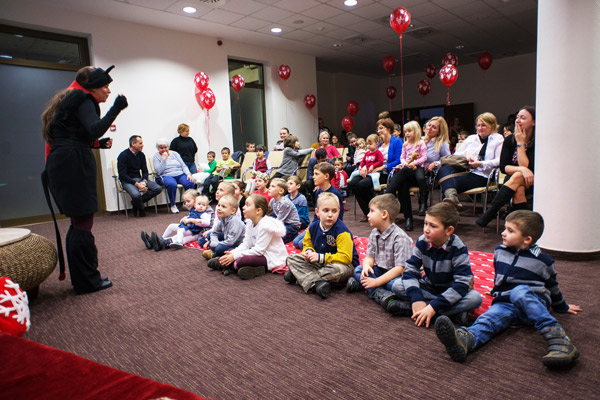 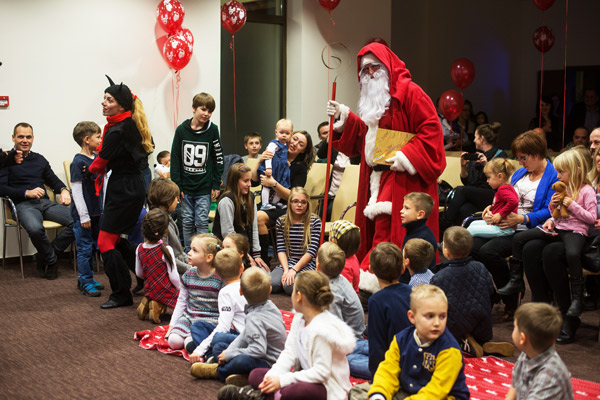 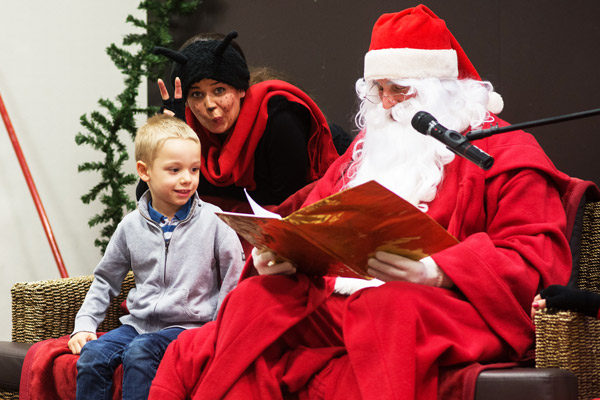 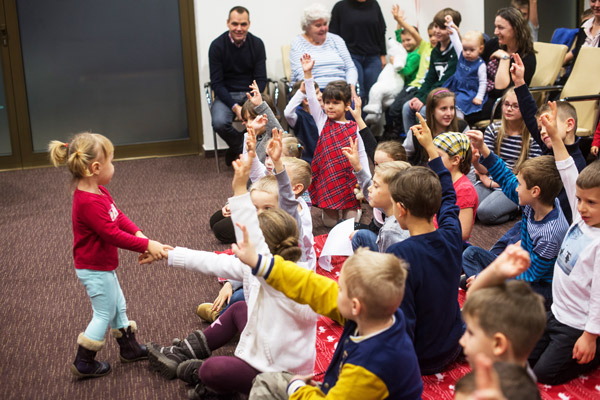 We would like to represent the history of the amazing transformation of the Market-House with the following video.

Place of worship in Máriagyűd inaugurated on 8 October

At the ceremony address was given by György Udvardy, Ordinary of Pécs and László Hegyi, Deputy Minister of State responsible for nationality and civil society relations at the State Secretariat for Church, Civil Society and Nationality Affairs.

The service level of the visitors reaches the requirements of the 21st century by the refurbishment of the church, outdoor facilities, altar, chapel, sculptures and benches and creating the pilgrimages helping the access thereto, and these developments are expected to make the memories long lasting.

As a result of the works the facade of the church got renewed while the statics of the building strengthened. Upon refurbishing the environment cover areas were created besides building supporting walls and stairs and the St. Ferenc well with drinking water was reconstructed.

New at the place of worship is the tourist path with beads. The small lights on the path beads are formed by special lights, while the five big chains are symbolized by tile motives on special points, resting places.

After demolishing several buildings on the area of the University of Pécs the two-level Rehabilitation Centre and the connected parking were built. The new building accommodation examining rooms with a big waiting area, from where the clients are directed with the help of a patient flow system. 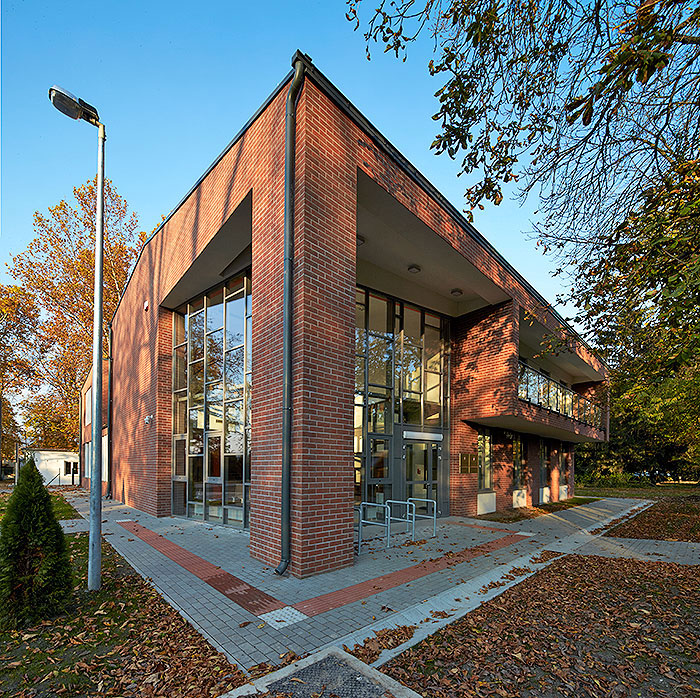 The execution ran on an extremely tight schedule and was completed during 5 and a half months, to the Investor’s biggest satisfaction. The building will be used by the National Rehabilitation and Social Office and the Government Office of Baranya County jointly.

Topping-out Ceremony at the Castle of Füzér

The bastions of the reception hall, castle and chapel reached their highest point, thereby the project has come to another milestone. On this occasion the topping-out ceremony of the palace of the upper castle and the gothic chapel was held on 17 October. 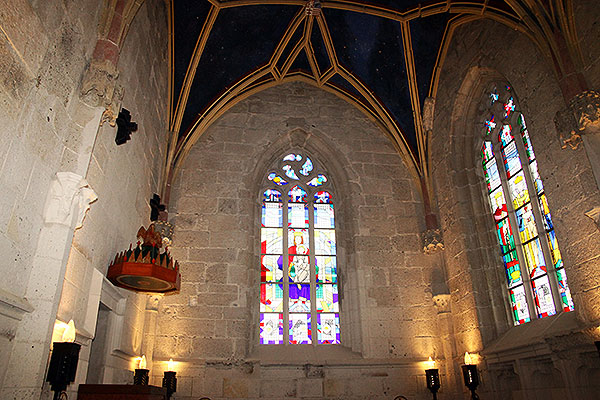 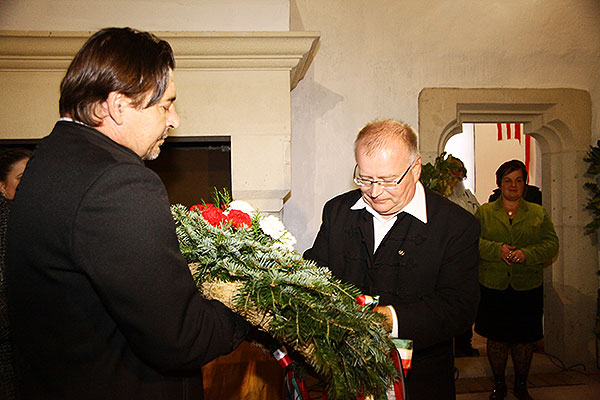 In the framework of the ceremony attended by Béla Glattfelder, Minister of State for Economic Regulation a bouquet was laid on the cross on the roof of the castle chapel, then the national flag was consecrated, afterwards placed and raised on the lower bastion also in the course of the ceremony.

The reconstruction reminding of the golden age of the Castle of Füzér in the 16-17th century runs from a budget of more than 2 billion forint, and it is completed with clever solutions satisfying the needs of the visitors of the 21st century. The palace wing, the gothic chapel and the lower bastion of the castle will also be added. The project itself is expected to be finished by the end of the year, thus the facility will be open for the visitors from spring 2016.

The building was dismantled to its structure, as there were leaks on several spots and its condition became critical over the long years. After the reconstruction the buyers wishing to spend their mornings on Klauzál Square can be delighted at the clean, easy-to-visit building worthy to a market hall. 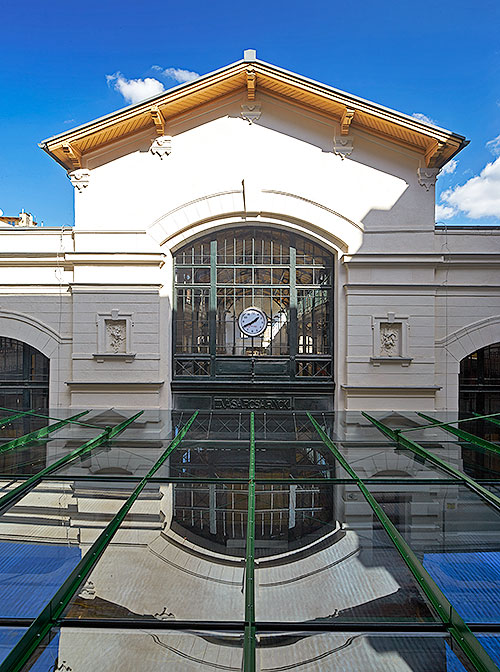 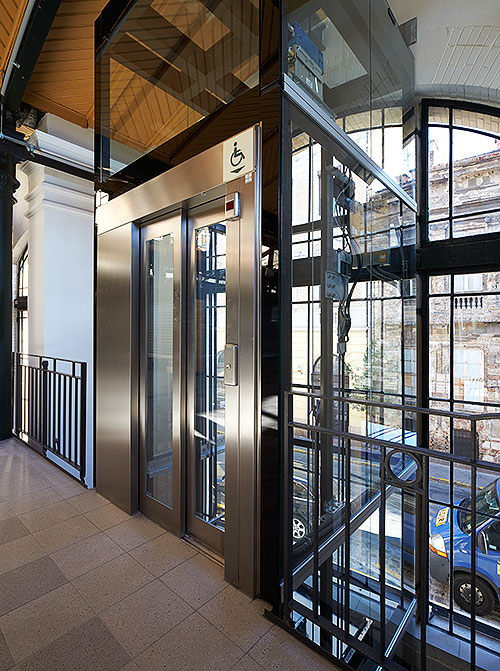 Escalators were built and the panorama elevator enriched the market hall, from which you can well survey the complete area. From the upper level you can look into each shop, this makes the experience even more interesting, the passers-by can have a glance even behind the butcher’s counter. 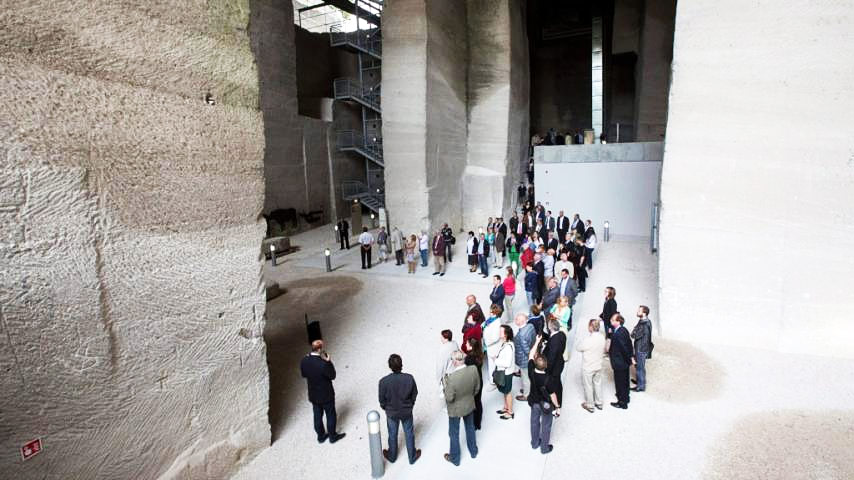 Under the investment the theatre areas have been completely restored and the theatre, lighting and sound technologies have been modernized. For informative purposes a modern Educational Path has been created with interactive platforms introducing the evolvement of the cave, the history and the conditions of the stones.

János Lázár said that according to the plans of the government the so far restored Esterházy-treasures, which are at present in the Museum of Applied Arts, would get back to Fertőd. Besides, the government „is also determined and committed that” the opera-house, the tomb of Miklós Esterházy and his wife, Countess Margit Cziráky, the water tower, the riding-hall and every such establishment that belongs to the castle would be renewed.

While recalling the history of the castle complex, the politician claimed that those who know the baroque culture also know that the garden and the building were each other’s complimentary members, the heritage of Miklós „gorgeous” Esterházy is the proof of baroque being also a style of living. Many are not aware of the fact that we are the owners of one of the most beautiful baroque ensembles in Europe. 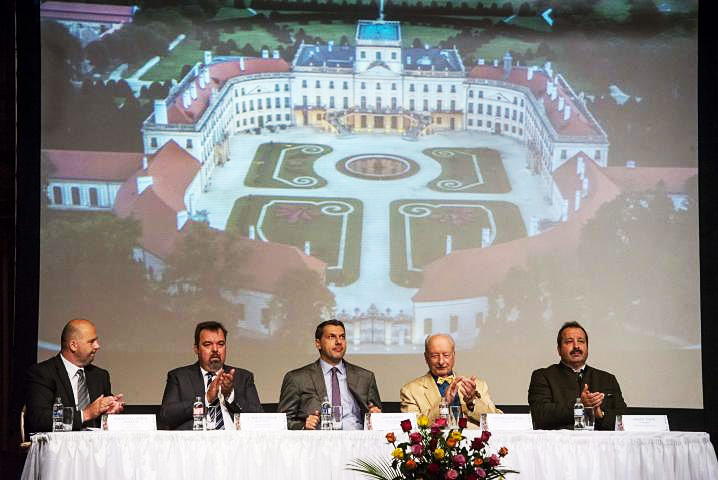 According to László Anzelm Bodrogai, the director-general of Eszterháza Culture, Research and Festival Centre, the garden established in 1908 by Countess Margit Cziráky will be the largest rose garden in Hungary, and it will have a gene bank function after Gergely Márk’s, internationally recognized rose breeder’s more than seven hundred rose species bred by himself have been put there.

Technical taking-over of the Stone-pit and Cave Theatre of Fertőrákos took place.

Viktor Orbán, the Prime Minister of Hungary and János Lázár, minister leading the premiership also inspected the Stone-pit when they visited to Sopron, in the company of Dr. Tamás Fodor mayor and they showed their appreciation in relation to the completed works. 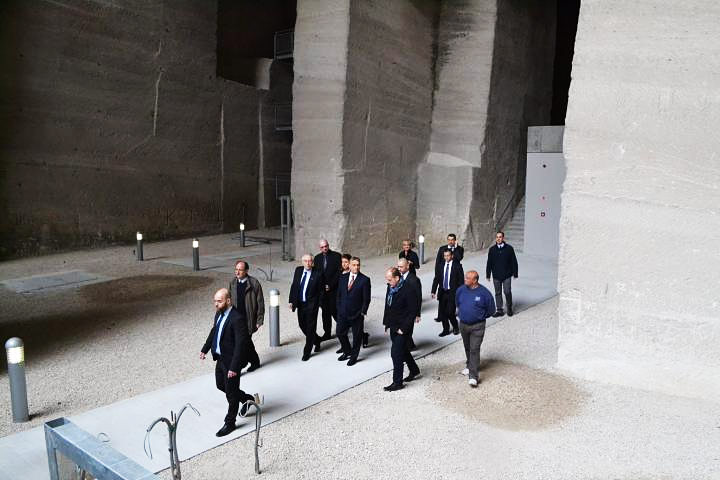 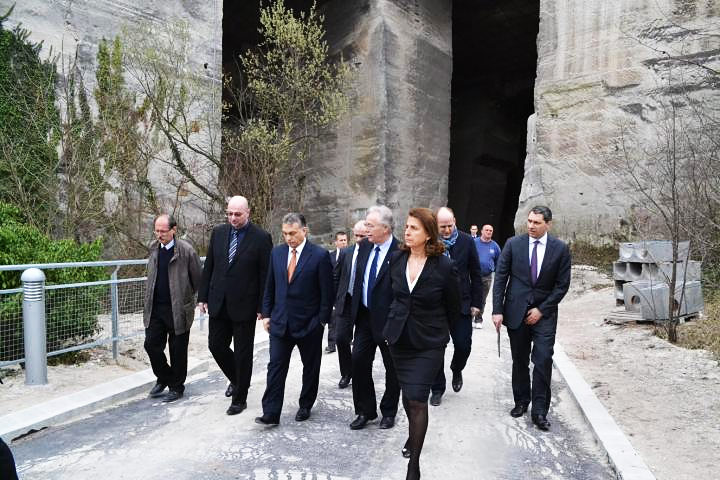 After its inaugural opening on 19th June 2015, the Cave Theatre of Fertőrákos will welcome the dear visitors with various programmes.

By the end of the construction, a new, four-storey building was realised and the X-ray department was renewed in the existing Operation-Diagnostics Block, while the hospital was working continuously.

The transformation of rooms of the X-ray department became necessary because the newly acquired patient examination machines had to be installed, which entailed structural reinforcement as well. As a consequence of the vicinity of the operation block, exceptionally disciplinary work was necessary. We connected the Operation-Diagnostics Block and the New Building with a bridge, for which the glass wall of the complete facing had to be opened and reconstructed. 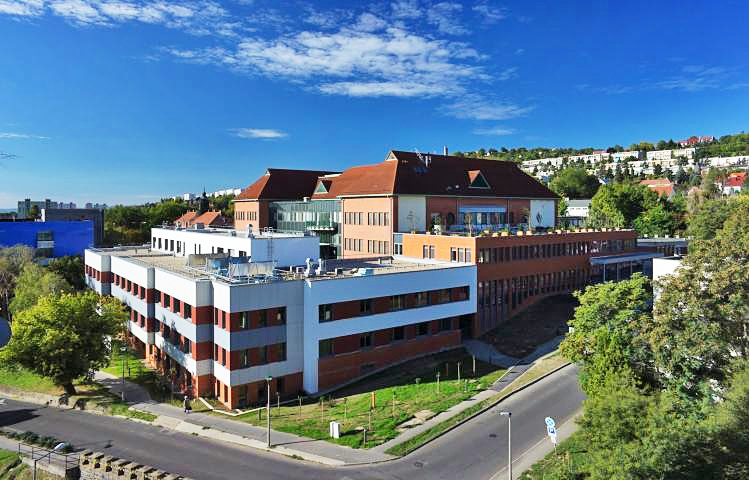 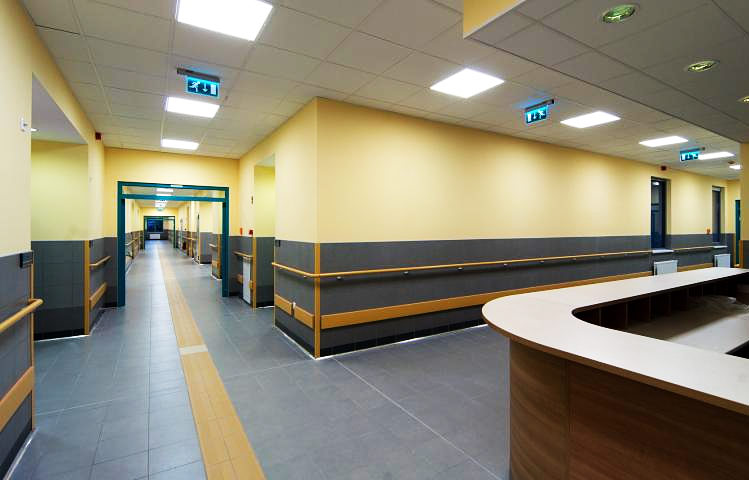 In the new building wing rooms were realised for caring out-patients and in-patients, and blind-orienting bands and mobile induction loops help patients with difficulties of sight and hearing.

The engineering systems are controlled by a modern building monitoring system. Several patient examination rooms and wards were realised on several floors, by fulfilling the needs of our modern times. 3 lifts had to be installed in the building in consideration of the aspects of obstacle-free conditions. Ceiling cooling and blinds placed near the windows make temperature more comfortable in the summer season.

Pécs, reconstruction of the Cathedral and the Granary

The most important tasks of the south-eastern tower of the Cathedral were the stone restoration of the full facade, the renewal of the internal staircases and the replacement of roof wood structures.

We realised new water discharge points, a new gutter was realised under the Apostles. We built a new pedestal of steel structure in the middle of the renewed roof and a pavement leading there from the South-Western tower on top of the pillars emerging from the roof. The lighting of the Cathedral facing and internal spaces was transformed completely. 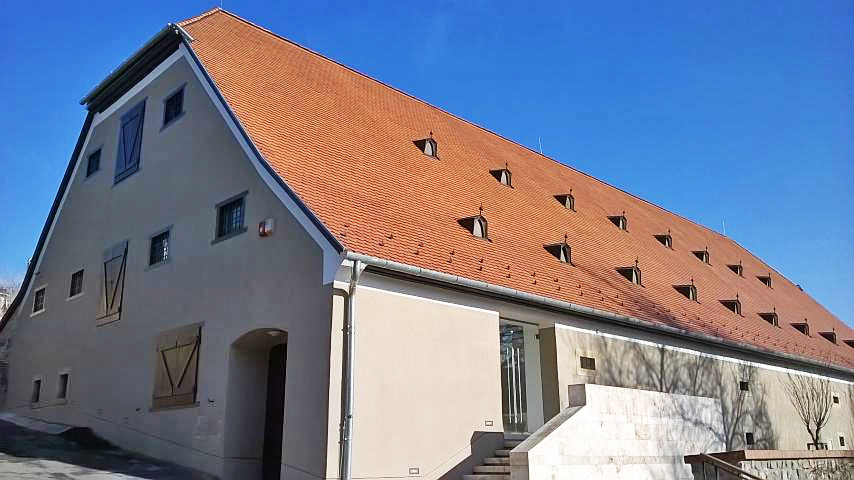 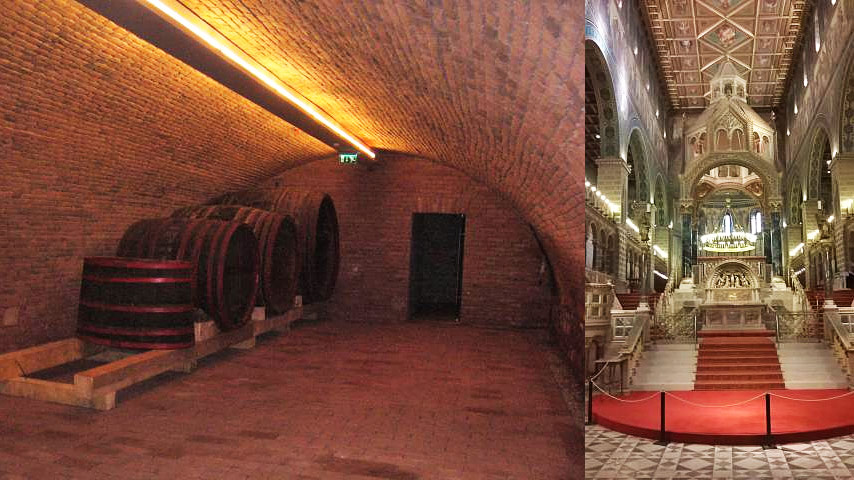 In the renewed Bishopric Granary there will be a two-floored basement with exposition places and catering function. On the ground floor, a projection (motion picture) room will host the visitors and on the 1st floor a conference room and a special room will host future events.

Two lifts help movement between the floors of the building. The roof structure had to be reconstructed by integrating a steel truss and the engineering equipment, machines were built into the attic. The facing received new surface cladding and new windows were built via the post-production of carpenter posts.